The Crown of Creation was a true crossover-project between classical music and rock.

The theme for the work: “A cyclus from genesis (not the band..) to escathology (the science and the wonder of the final things to come after death)” 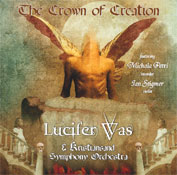 Lucifer Was headlined the Southern Discomfort Metal Festival in Kristiansand, Norway, on the 12th of September 2009.

The band performed the forthcoming album The Crown Of Creation in its entirety together with Kristiansand Symphony Orchestra’s chamber orchestra under the the direction of the world known violinist Jan Stigmer. Here are videos of two of the songs:

Into the Blue/Three Hammers Plus

The Crown of Creation

A mythical cycle about fall and redemption by Thore Engen. Meet the Norwegian prog rock band Lucifer Was.

More about Lucifer Was.